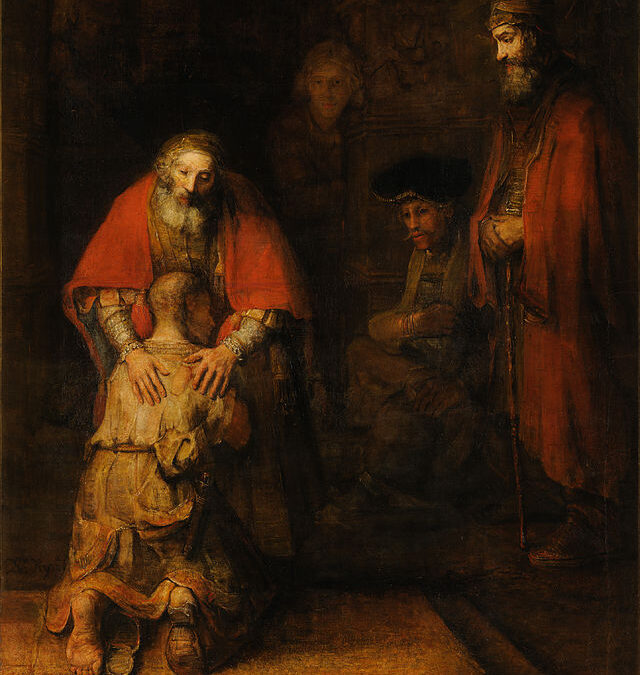 Rembrandt -­ The return of the prodigal son

“And he said, A certain man had two sons: And the younger of them said to [his] father, Father, give me the portion of goods that falleth [to me]. And he divided unto them [his] living. And not many days after the younger son gathered all together, and took his journey into a far country, and there wasted his substance with riotous living. And when he had spent all, there arose a mighty famine in that land; and he began to be in want. And he went and joined himself to a citizen of that country; and he sent him into his fields to feed swine. And he would fain have filled his belly with the husks that the swine did eat: and no man gave unto him. And when he came to himself, he said, How many hired servants of my father’s have bread enough and to spare, and I perish with hunger! I will arise and go to my father, and will say unto him, Father, I have sinned against heaven, and before thee, and am no more worthy to be called thy son: make me as one of thy hired servants. And he arose, and came to his father. But when he was yet a great way of , his father saw him, and had compassion, and ran, and fell on his neck, and kissed him. And the son said unto him, Father, I have sinned against heaven, and in thy sight, and am no more worthy to be called thy son. But the father said to his servants, Bring forth the best robe, and put [it] on him; and put a ring on his hand, and shoes on [his] feet: And bring hither the fatted calf, and kill [it]; and let us eat, and be merry: For this my son was dead, and is alive again; he was lost, and is found. And they began to be merry. Now his elder son was in the field: and as he came and drew nigh to the house, he heard music and dancing. And he called one of the servants, and asked what these things meant. And he said unto him, Thy brother is come; and thy father hath killed the fatted calf, because he hath received him safe and sound. And he was angry, and would not go in: therefore came his father out, and intreated him. And he answering said to [his] father, Lo, these many years do I serve thee, neither transgressed I at any time thy commandment: and yet thou never gavest me a kid, that I might make merry with my friends: But as soon as this thy son was come, which hath devoured thy living with harlots, thou hast killed for him the fatted calf. And he said unto him, Son, thou art ever with me, and all that I have is thine. It was meet that we should make merry, and be glad: for this thy brother was dead, and is alive again; and was lost, and is found.”

Rembrandt, in his last major work, interprets and adds a new meaning to this biblical story.

The original story describes the older son as somewhat negative and justifiably so – he was just deprived of his father’s undivided love, and complete inheritance, half of which he just lost to his “unworthy” rascal brother.

It seems to me that Rembrandt use him to represent a hard working spiritual seeker, struggling to follow the higher right, as embodied by the father.
I am told that Rembrandt said about this work: “This is my final message to the world”.

And indeed, it is a complete “model of the universe” or more practically, a detailed description of human psychology and a guidebook for spiritual work.

There are six figures in the picture, arranged in two triangles, similar to a Star of David. The big triangle, pointing downwards is formed by the prodigal son at the bottom, his brother to the right and an almost invisible young girl (maybe their sister?) entering the scene, at the top. The other triangle, smaller and almost enclosed in the first, includes the father, another wealthy older man (his friend?) and a young man – possibly one of the house servants.

The three figures mentioned in the bible: the father and two sons, are much more detailed, colorful and in the foreground, while the others are sketched, more in the shade, and in the background.

The father is clearly a rich man. This is subtly visible in his dress. He is not trying to display his wealth. It is not a wealth of personality. The expression on his face is almost unknown or mysterious. It seems unclear at first, yet slowly one sees much pain and suffering, but no sign of self­pity or bitterness. His face expresses all the contradictory emotions evoked in the situation: happiness, sorrow, joy, anger, surprise, hurt, and gratitude, all in harmony. This is the face of conscience.

We see the young son from the back. Only a hint of his expression­less face is visible, just enough for us to know that he gave up all illusions. It is primarily the illusion that he has anything to lose. He is kneeling on a raised square stone, probably a special area in the room, reminiscent of an altar. Maybe it is a reference to the sacrifice of Isaac, a much earlier Rembrandt painting displayed on the far side of the same room. His clothes are ragged, his shoes have holes, and one of them fell off as he lowers himself to get his father’s greeting. The only reminder of his earlier wealth and power is a knife. Unlike anything else about him it is in a surprisingly good condition. One wonders if this means that he gave up willingly the option of violence in return for real love. Maybe passing the same test, which Romeo (of Juliette) passes first and then, on the second trial, fails. Self­will is violent. It is a knife one keeps ready to draw when the externals seem threatening. Complete acceptance includes giving up self­will and instead learning to trust something higher. Allowing all influences in as potentially blessed, meaningful and coming from a higher source. Feeding for a while with the pigs might be a prerequisite for such level of acceptance.

The older son is struggling with his contradictory emotions. Unlike his father, he still believes in the power of his mind, body and his earthly wealth. He holds a stick, symbolizing his powers and control. His dress displays his wealth in a more obvious manner then that of his father. At the
same time a part of him wants to follow his father’s spiritual guidance. Can he give up his false identity, or the illusion of “doing”?

All these figures represent parts of our own psychology.

We are all prodigal sons, who betrayed the trust of our “father”, wasted his “money”, in the form of abusing our own highest resources, and in the process we worn out our “shoes”: our connection with the ground, with the real sources of our body and soul. What kind of effort is required to overcome guilt and shame and return back to our loving father, humbled and willing to start again
with a blessing?

We all have that father within, at least potentially. That is the part that is able to accept and love unconditionally. First of all love and accept ourselves.

We also have the older brother within, who worked diligently, followed the rules which come from some larger organization, authority, or law. That is the part that wants to always be a good boy or girl. Can we face injustice? Can we learn to see from another scale that our brother, the prodigal son (internal or external), deserves as much as we do and has at least the same possibilities?

Can we forgive him, share with him all we have and thus acquire a treasure in heaven? Or maybe we can simply give up self­will and follow our inner father just because we trust he knows better or we can sense that it is the higher right?

In the painting there are the three more characters that are not mentioned in the biblical story. The first two are unidentified observers. The older one, the rich friend, has some emotional involvement in the scene. He seems pleased to see the prodigal son returning, and happy to share the father’s joy. Many people do not notice the young girl at the top of the painting. The painting is dark and the reflection from the window in sometimes harsh. One needs to move around the painting, and come again at different times of the day, then observe for a long time.

She is the only one moving. Maybe the emotional efforts of all the others enable her to lightly dance into the scene through the open door.

These three characters might represent aspects of the observing self, soul, and spirit.

When I first saw this painting in the Hermitage museum in St. Petersburg, I was struck by the amazing transformation of the biblical story. Two days later, I went again with some friends and we tried to spend a whole hour in the presence of this great painting. The tourist groups, in a variety of languages, frequenting this point as a part of their quick tour of the Hermitage, add additional dimensions to the experience. Some of the tour guides are quite knowledgeable and can deepen the perspective. While others whiz by, just like the many thoughts and feelings going through one’s mind.

Revisiting there a few years later completed the experience for me. My hope here is to share my realization that self­acceptance is not a side issue, but rather an essential part of the effort to raise awareness and be present. When one is even a little more mindful, everything acts as a mirror.

One is flooded with a stream of images and new connections. If one is unable to accept them, one is thrown back to a lower, more sleep like state. On the other hand, if one is open to what one sees and feels and can say with Prospero in the “Tempest”: “This thing of darkness I acknowledge mine”, the state is extended and deepened.